In this special NASS Report Card on Stagnated Bills, we focus on the parliamentarians with the most bills yet to go beyond the first reading stage

As the four-year tenure of the Ninth National Assembly slowly comes to an end, all unfinished parliamentary business will be terminated, including all bills that have yet to be passed into law.

In this special NASS Report Card on Stagnated Bills, we focus on the parliamentarians with the most bills yet to go beyond the 1st reading stage. 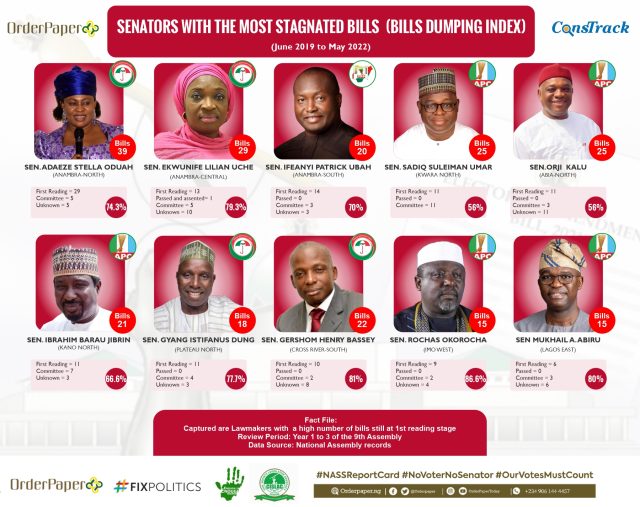 Proceedings at the National Assembly for a bill introduced at plenary is that the sponsor of the bill ensures that such a bill goes through the various stage for it to become law. Therefore, it rests on the lawmaker sponsoring any bill to channel all effort towards achieving this. However, in the past three years of the 9th National Assembly, there appears to be a bill-dumping trend leading to stagnation.

A bill is said to stagnate when the bill’s sponsor fails to move the bill beyond the introduction/ first reading stage. Therefore, after the bill’s short title is read on the floor of the Senate by the Clerk, not much is heard of it after that.

According to the OrderPaper Annual National Assembly appraisal scorecards, 646:129 is the ratio of bills stagnated (total number of bills at first reading and unknown) to the number of bills passed at the end of the third session of the 9th Senate. While was one negative, one was suspended, and 235 are at the committee stage. These numbers are out of the 1009 bills sponsored from June 2019 to May 2022). Hence by implication, this means that a large chunk of these bills will remain unfinished parliamentary business by the end of the 9th Assembly.

While in Nigeria, the cost of enacting and adopting a bill is not made public, it is safe to say that the resources used in sponsoring these bills, whether large or meagre, have gone down the drain. Additionally, from a performance metrics perspective, these lawmakers have failed to tick the box when carrying out the duty of lawmaking.

Hence, in analysing the 9th Assembly Senators with stagnated bills, while most of them top the bills sponsorships charts by volume, the trend is that they failed to push these bills beyond the first reading stage.

The Bills Dumping Index captures Senators with at least 15 bills and over half of which are stagnated at the first reading stage.

A further look at the list of these Senators show that most have served in the Senate more than once. While five are returning senators, the other five are newbies who likewise have some form of political experience before coming into the 9th Senate. Thus, legislative inexperience cannot be said to be the cause of bill stagnation.

The following are details of the senators that make up the chart:

She leads the Senators with the highest tally at 39 bills in three years. On the flip side, she is yet to move most of them beyond first reading.

Interestingly, the lawmaker was also on the stagnated bills chart at midterm; a lot stayed the same at the end of the third session. Of her 37 bills, 29 are still at the first reading stage. Therefore 74.3% of her bills have been stagnant for the past three years.

As a former minister and Senator seeking another term in the 10th Assembly, the political and legislative clout to push her bills beyond first reading should not be lacking. Some of her bills include the protection of children from sexual offences, establishment bills, renewable energy, and marriage act amendment and constitution alteration.

Like her Anambra and female counterpart above, Ekwunife has been on the stagnated bills list since the NASS midterm report.

The Anambra lawmaker seeking a third term in the Senate has 13 out of her 29 bills still at first reading stage. Also, ten bills are at unknown stages, while five are in committee, and one has been passed for concurrence, this being the public procurement Act 2007 (amendment) bill.

Despite being second and fourth on the female Senators and top bills sponsor by volume scorecard, 79.3% of her bills have stagnated for the past three years.

The third of the Anambra senators on the chart has likewise sponsored a high number of bills, with 20 bills in three years. However, of his 20 bills, 14 are still at first reading stage, three are unknown, and the other three are at the committee stage.

The first-time Senator seeking re-election into the 10th Assembly of the Senate is the lone member elected into the 9th Senate on the YPP ticket. He has sponsored the petroleum tankers safety bill, the family advancement economic programme Act (repeal) bill, and many establishment bills.

Another newbie Senator on the list,  he has sponsored 25 bills in three years. Also, 11 of his bills are stuck at first reading, 11 are at the committee stage, and two are unknown.

His bills include the payment system bills, HYPADEC act amendment, and establishment bills. With 11 bills stagnated, that means 56% of his bills have been dumped since June 2019.

The pharmacist turned politician and author of the book “How I became a Senator in 30 days” is also seeking a second term in the 2023 National Assembly elections.

Although he is new to the Senate, with his experience as a politician and former commission in Kaduna, it is fair to say the legislative processes are not altogether new to him.

The ex-governor and Chief Whip of the Senate interestingly climbed from four bills at midterm to 25 sponsored by the end of the third year. However, this means that while 11 of the bills are at the committee stage, the remaining make up 56% of his bills still at first reading stage.

Also, Kalu will be contesting to return to the Senate for a second time in the 2023 National Assembly elections. His bills primarily cover the education, agriculture and judicial sectors.

These bills include a national offender’s central registry, establishment bills, sexual offenders register, fire service amendment, and constitution alteration. For someone familiar with government service and politics, it is expected that more of his bills should have progressed towards becoming laws.

The returning Senator was earlier in the National Assembly from 1999-2003 as a Rep member and then in the Senate from 2015.

He has sponsored 21 bills so far, and of these bills, 66.6% are still at the first reading stage. Seeking to return to the Senate for the third time, he has sponsored bills on transport, education and science.

He has had 18 bills in three years, 11 of which are still at the first reading stage and three unknown, indicating that 77.7% are yet to progress to second reading.

While 11 of his bills are on the Constitution amendment, the others are on judiciary, health and security.

The embattled ex-governor and newbie Senator has sponsored 15 bills at the end of the third session of the 9th Assembly.

However, 86.6% have been left at the first reading stage. He has been in politics since the restoration of democracy in 1999. Hence, while he might be new to the Senate, it would have been expected that he had learnt the art of lobbying as a politician to move his bills further up.

Some of his bills include establishment bills, constitution amendments and finance.

In his two years in the Senate, the newbie senator sponsored 15 bills; however, 80% are still at the first reading stage.

His bills are primarily on finance and corporate governance, which is not surprising given his profession. Abiru will be seeking a second term in the Senate at the 2023 National Assembly elections.

Note: Bills tagged unknown have no status/stage specified in the National Assembly bills records; however, several of these bills are stuck at the first reading stage from investigations.

Regina is a legal practitioner and copy writer with interest in International Humanitarian Law (IHL) and product design. A programme executive at OrderPaper, her core strength is in programme development, oversight and evaluation, analytics and writing.