The Productivity Index entails the progression of a piece of legislation from draft to Presidential assent. This Performance Scorecard of the Top 10 Senators by Bills Progression (Productivity Index) highlights parliamentarians who have worked at ensuring their bills move far along the steps of lawmaking

Without the progression of a bill, the sponsorship of such a bill will amount to nothing. Hence, there are stages of lawmaking generally labelled gazetting, first reading, second reading, committee, third reading, concurrence, and presidential assent. With the bill sponsor fulfilling these stages, it is an indicator of his/her productivity as a lawmaker.

Furthermore, the nitty-gritty of these stages of lawmaking generally entails the presentation, lobbying, and debate on these bills for them to become laws. Similarly, lawmaking by the legislators consists of identifying compromises in ideas and interests in the process of this passage of a bill. As the bill progresses, the parliament must be able to reconcile opposing (and sometimes conflicting interests) between the state and the citizens or state institutions.

Therefore, it is the above metrics that OrderPaper applied in arriving at the top 10 senators by bill progression (productivity index) seen below. 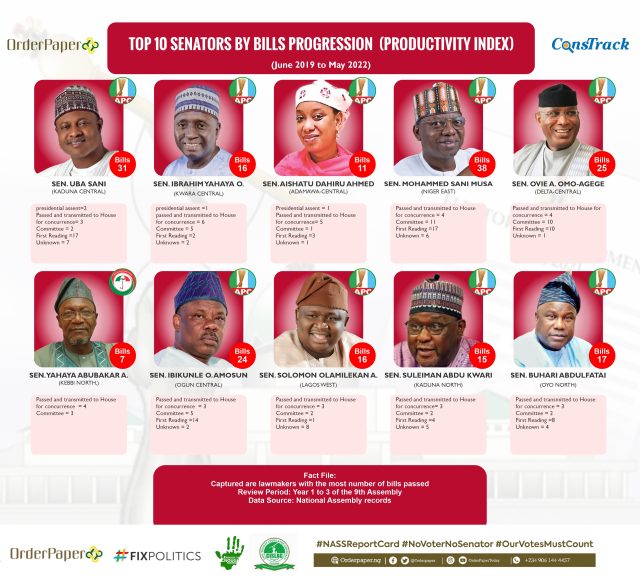 The first-term Senator, who is also contesting for the Kaduna Gubernatorial seat in 2023, tops the productivity chart.

Two of the bills sponsored by this lawmaker have received Presidential assent, and three passed for concurrence to the House out of 31 bills. Others are at the Committee and First reading stage. The assented bills are the Banks and Other Financial Institution Act (BOFIA) and the Asset Management Corporation of Nigeria Act. |

At the same time, those for concurrence bother on an amendment to the Firearms Act as well as the establishment of a College of Education in Giwa, Kaduna and a Medical Centre in Rigassa, Kaduna.

Another newbie in the Senate that makes the productivity list is Oloriegbe. His election into the Senate was keenly contested as he replaced the previous President of the Senate, Bukola Saraki. Interestingly, his being a medical doctor reflects the nature of the bills in his name.

He has one assented bill, four passed to the House for concurrence, five at committee, and four at the first reading stage, in the period under review.

Among these bills, the Mental Health and Substance Abuse Bill has been assented to by President Muhammadu Buhari. Those at the House for concurrence are the Medical and Dental Practitioners Act 1988 (Repeal and Re-enactment); the Health Insurance Commission; the National Emergency Medical Services Agency (Establishment) the National Maternal and Paternal Death, Surveillance and Response; as well as the Psychiatric Hospital (Amendment) Bills.

Previously a member of the House of Representatives in the 7th Assembly, she came into the 9th Assembly as a new Senator.

The lone female Senator on the chart has the Modibbo Adama University of Technology, Adamawa (Establishment) Bill already signed into law. Also, five of the bills she sponsored in the last three years, which bother on the establishment of other universities and medical centres, have been transmitted to the House for concurrence.

Additionally, one of the bills in her name is at the Committee stage, while four are at First reading stage, bringing a tally of bills to her credit to 11 in three years. For the 2023 gubernatorial elections, she will be contesting as the only female flagbearer of the governing All Progressives Congress (APC) in the country.

Yet another newbie on the bills progression chart, he appears with a tally of 38 bills in three years. While four have been transmitted to the House for Concurrence, 11 are in the Committee stage, and the others are at the stage of First reading stage.

The bills passed for concurrence are establishment bills for a Teaching Hospital Development Fund, an Orthopaedic Hospital, and two universities.

The first-term Senator will be seeking a second term in the 2023 National Assembly elections.

A second-term lawmaker, the Deputy President of the Senate, comes in on the productivity chart with 25 bills.

While four of these bills have been transmitted to the House for Concurrence, ten have been referred to various Committees of the Senate, and 11 are at First reading stage. The bills for concurrence cover areas on university establishment, sexual harassment, and the Electoral Act. Other bills sponsored by the lawmaker are centred mainly on the Constitution amendment.

Senator Omo-Agege is the 2023 Delta gubernatorial candidate of his party; the All Progressives Congress (APC).

A former Senate Majority Leader, he resigned his position as a principal officer following his defection from the majority All Progressive Congress (APC) to the opposition Peoples Democratic Party (PDP).

In three years, he has sponsored seven bills, out of which four have been passed for concurrence to the House. Although his total number of bills is in single digits, he has been productive in ensuring they progress.

Among these passed bills, which are all centered on establishment, two seek the establishment of educational institutions. The other bills seek to establish the Chartered Institute of Forensic Investigative Professionals of Nigeria and the Chartered Institute of Directors of Nigeria. Like some of his other counterparts, he is also seeking to return to the Senate in the 2023 National Assembly elections.

READ ALSO: It’s no one’s concern that I defected twice in a year – Rep Dambazau

The ex-governor is one of the two new Senators on the progressive chart for the third session, as he did not make the list during the Mid-term Report on the National Assembly.

In three years, he has a total of 24 bills to his credit, out of which three have been passed to the House for Concurrence. These include an establishment bill for a Science-based University, an amendment to the 2003 Child Rights Act, and the Nationwide Toll Bill. The stages of other bills he sponsored are – five at the Committee stage and 16 awaiting second reading.

The others are private and public sector bills on insurance, mortgage, student financial scheme, electric waste, environment, and security. He attempted to secure the Presidential ticket of his party; the All Progressives Congress (APC) and he joins the list of lawmakers who will be not be at the 10th National Assembly.

The Lagos lawmaker has sponsored 16 bills in three years, three of which have been transmitted to the House for Concurrence.

These bills bother on establishing Technology Universities in Ilaro and Yaba, respectively, while the other seeks to establish a Nigeria French Language Village. Two of the bills sponsored by the lawmaker are at the Committee stage, and the others at the First reading stage covers areas like Constitution amendment, currency conversion, NDDC Act (Amendment) and the National Commission for Women (Establishment) Bill.

A former member of the House of Representatives, Senator Adeola is seeking a return to the Red Chamber as the flagbearer of the All Progressives Congress (APC) as flagbearer for Ogun West Senatorial District.

The second Senator new to the bills progression chart for year three is Senator Abdu Kwari. The lawmaker has sponsored 15 bills in the last three years.

Three of the bills have been transmitted to the House for Concurrence, while the others are at various stages. The bills passed are for the establishment of a Federal College of Crop Science in Lere, a Money Laundering Prohibition Bill and the Forfeited Asset Management Authority (Enactment) Bill.

The newbie Senator will likewise be seeking a return to the Senate for a second term at the 2023 National Assembly elections.

Three of 17 bills sponsored by the Senator have been transmitted to the House for Concurrence. While two are to establish a University and a National Transport Commission, the third is seeking to repeal and re-enact the Nigerian Railway Corporation Act 2004.

Additionally, two other bills are in Committee Stage, and the others have passed the First Reading stage. He will be seeking a return to the Senate for a third time and is a candidate for the 2023 National Assembly Elections.

Note: Bills tagged unknown have no stage of the bill specified in the National Assembly Bills Data bank. However, from the investigation, several of these bills are stuck at the first reading stage.

Regina is a legal practitioner and copy writer with interest in International Humanitarian Law (IHL) and product design. A programme executive at OrderPaper, her core strength is in programme development, oversight and evaluation, analytics and writing.