According to data from the Independent National Electoral Commission (INEC), the North Central state has fourteen lawmakers in the federal parliament, comprising three Senators and eleven members of the House of Representatives. 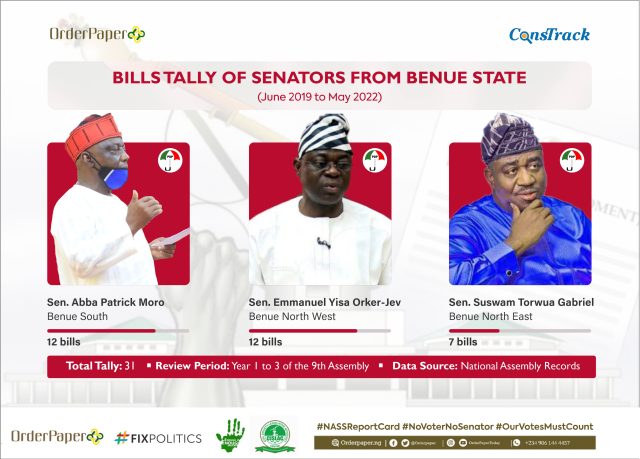 For the third year, Senator Abba Moro representing Benue South sponsored the highest number of bills in the period under review. The former Interior Minister, a first-time lawmaker, has sponsored 12 bills since the inauguration of the current National Assembly.

On the same tally with Senator Moro is Senator Emmanuel Yisa Orker-Jev representing Benue North West. A three-time member of the House of Representatives representing Buruku Federal Constituency before his election to the Red Chamber in 2019, the lawmaker has sponsored 12 bills.

Governor of Benue State between 2007 and 2015, Gabriel Suswam representing Benue North East Senatorial District, is the third lawmaker from the state in the Red Chamber. In the last three years of the Ninth Assembly, the former member of the House of Representatives representing Katsina-Ala/Ukum/Logo Federal Constituency has sponsored seven bills thus far.

SCORECARD FOR MEMBERS OF THE HOUSE OF REPRESENTATIVES 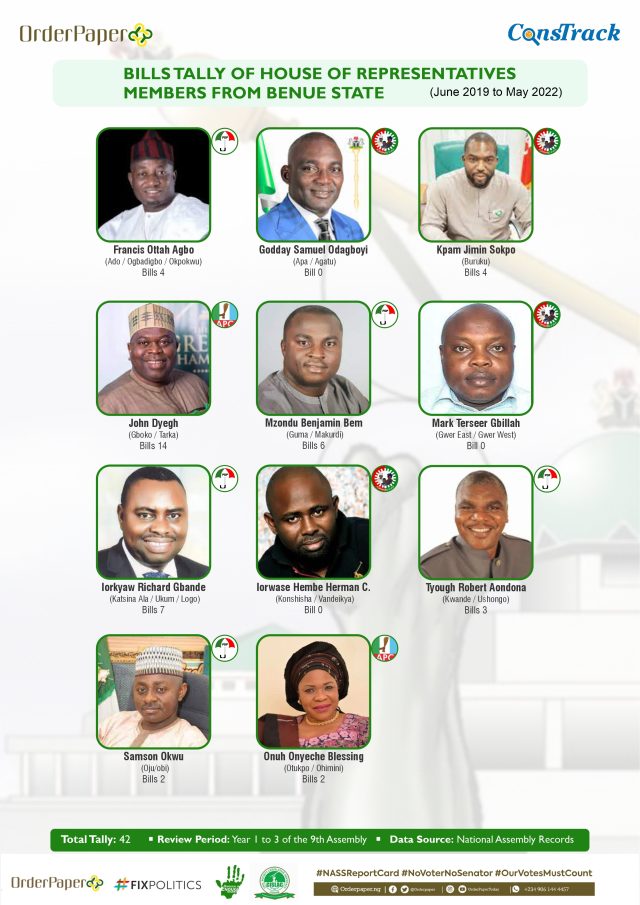 Rep. John Dyegh, representing Gboko/Tarka Federal Constituency, leads the State delegation in the Green Chamber in bill sponsorship. The three-term lawmaker has 14 Bills to his credit, including the Electoral Offences Commission Bill, which is currently at the Committee Stage.

The trio of Herman Hembe (Konshisha/Vandeikya), Mark Terser Gbillah (Guma East/Guma West), and Godday Samuel Odagboyi (Apa/Agatu) are the only members of the Benue State delegation without a bill. Incidentally, the trio are members of the Labour Party (LP).

Fact File: Performance Scorecards of Ex-Governors at the 9th Assembly

2023: Kwara Governor, Abdulrazaq has two mountains to climb. Can he?