Performance Scorecard of the fourteen Senators and members of the House of Representatives from Sokoto State in the current National Assembly from 2019 to 2022. 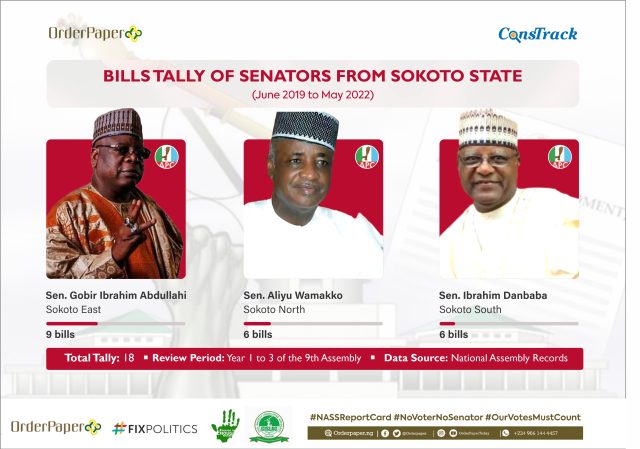 Gobir Ibrahim Abdullahi
The lawmaker representing Sokoto East Senatorial District in the National Assembly has sponsored nine bills in the period under review. One of the bills so sponsored, seeks to establish the Federal Medical Centre, Gwadabawa, Sokoto State, which is currently slated for first reading.

Having been at the National Assembly since 2007, he is one of the ranking lawmakers from the State. In June 2022, following the resignation of the Senate Majority Leader, Senator Yayaha Abdullahi, he was chosen by his party; the All Progressives Congress (APC), to occupy the principal office.

Aliyu Magatakarda Wammako
The lawmaker representing Sokoto North Senatorial District has so far sponsored six bills in the period under review, including that seeking to establish a Federal Polytechnic in Silame, Sokoto State, currently at first reading.

The lawmaker is a dye-in-wool politician and served as Governor of Sokoto State for two terms before he transitioned to the Senate in 2015.

Ibrahim Abdullahi Danbaba
The lawmaker representing Sokoto South Senatorial District has so far sponsored six bills in the period under review, including that seeking to amend the Establishment Act of the National Hajj Commission, currently at the Committee stage.

Senator Danbaba was Deputy Senate Minority Whip until April 2022, when he exited the opposition Peoples’ Democratic Party (PDP) and joined the All Progressives Congress (APC). 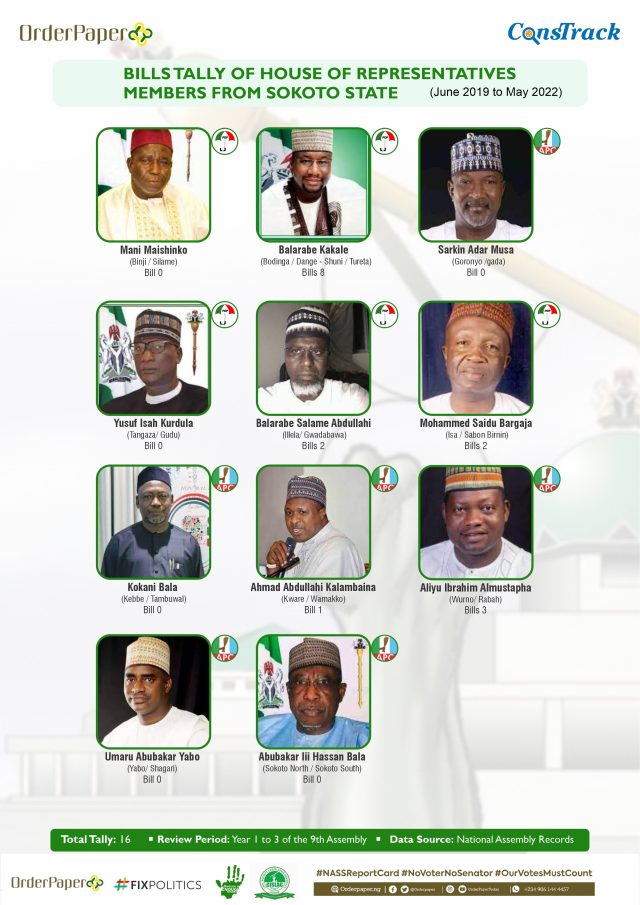 Balarabe Shehu Kakale
The lawmaker representing Dange/Shuni/Bodinga/Tureta in the federal parliament has so far sponsored eight bills in the period under review.

Aliyu Ibrahim Mustapha
Representing Wurno/Rabah Federal Constituency in the federal parliament, he has had three bills in his name in the three years.

Abdullahi Balarabe Salame
A representative of Illela/Gwadabawa Federal Constituency in the Federal Parliament has, since 2019, sponsored two bills.

Mohammed Saidu Bargaja
The lawmaker representing Isa/Sabon Birni Federal Constituency in the Federal Parliament also has two bills to his credit in the last three years.

Ahmad Abdullahi Kalambaina
Representing Kware/Wammako Federal Constituency, the lawmaker has sponsored one piece of legislation since the inauguration of the House in 2019.

In the period under review, the following lawmakers sponsored zero bills: