Katsina State has eighteen lawmakers in the Ninth National Assembly. Here's a Performance Scorecard of the Senators and members of the House of Representatives from the State in the area of Bill Sponsorship since 2019

Katsina State has eighteen lawmakers in the Ninth National Assembly, which was inaugurated in June 2019.

This piece is, therefore, a Performance Scorecard of these Senators and members of the House of Representatives from the State in the area of Bill Sponsorship between 2019 and 2022 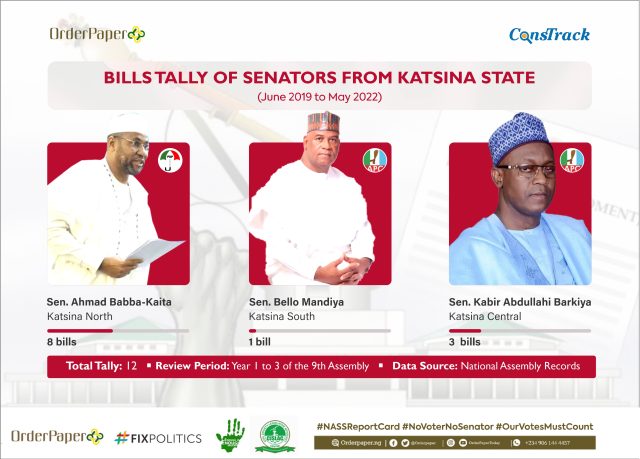 Ahmad Babba-Kaita
Elected to parliament in 2018 to represent Katsina North Senatorial District, Senator Babba-Kaita has sponsored eight bills in the period of review. One of the bills sponsored by the lawmaker is the Federal Polytechnic Daura Act (Amendment) Bill, 2019.

He had served two terms in the House of Representatives (2007 t- 2015) before moving to the Senate in 2018 following the demise of Senator Mustapha Bukar. In 2019 Kaita was re-elected on the platform of the ruling All Progressives Congress (APC) but defected in 2022 to the Peoples Democratic Party (PDP) in the build-up to the 2023 National Assembly Elections.

Kabir Abdullahi Barkiya
A representative of Katsina Central Senatorial District at the Red Chamber, Barkiya has so far sponsored three bills since the inception of the Ninth Assembly.

Bello Madiya
The Senator representing Katsina South in the National Assembly has just one bill to his name in the last three years.

He was first elected to the Red Chamber in 2019 and is currently Chairman of the Senate Committee on Water Resources. 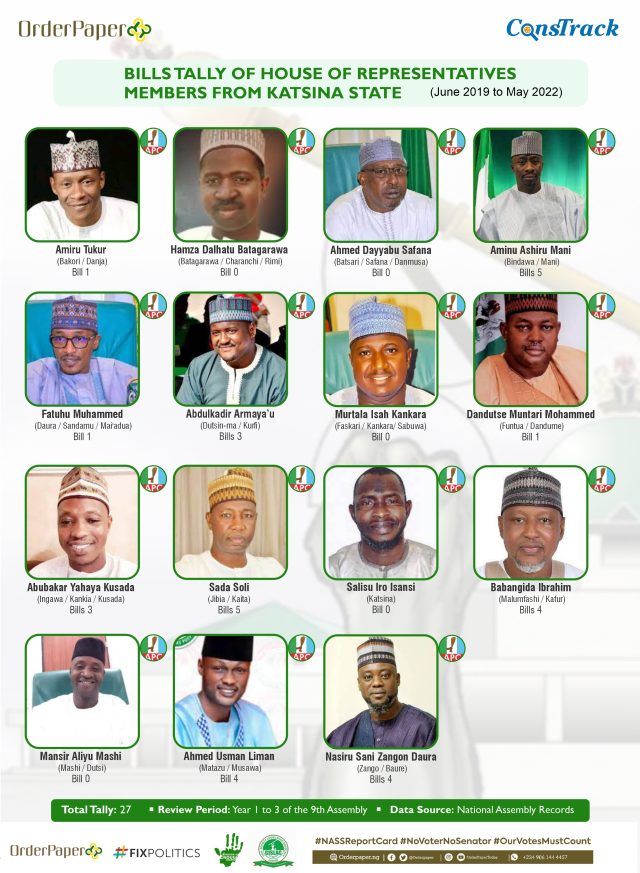 The bill seeks to establish a regulatory framework for the Water Resources sector in Nigeria, as well as provide for the equitable and sustainable development, management, use and conservation of Nigeria’s surface water and groundwater resources.

Babangida Ibrahim
Representing Malumfashi/Kafur Federal Constituency, the lawmaker has had four bills to his name in the last three years.

Ahmed Usman Liman
A representative of Matazu/Musawa Federal Constituency, he has four bills to his credit since being in the parliament in 2019.

Abubakar Yahaya Kusada
A representative of Ingawa/Kankia/Kusada Federal Constituency, he has had three bills to his credit since 2019.

However, five out of the eighteen lawmakers from Katsina State sponsored zero bills in the period under review. They are: