In this Performance Appraisal series, we present the scorecard of the Senators and members of the House of Representatives from Rivers State in the area of Bill Sponsorship between 2019 and 2022

Ojochenemi Onje-James3 weeks ago6 min
In this Performance Appraisal series, we present the scorecard of the Senators and members of the House of Representatives from Rivers State in the area of Bill Sponsorship between 2019 and 2022

The South-Southern State has sixteen federal lawmakers in the National Assembly. 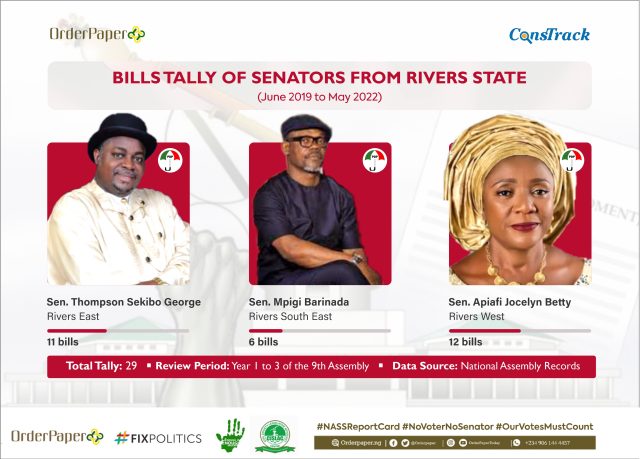 The only female Senator from Rivers State represents Rivers West Senatorial District. In the period under review, she has had twelve bills to her name.

Senator Apiafi had been a lawmaker at the House of Representatives for three terms before moving in 2019 to the Red Chamber, where she chairs its Committee on Women Affairs

Elected to parliament in 2007 to represent Rivers East Senatorial District in the National Assembly, Senator Sekibo has since 2019, sponsored eleven bills. Prominent among these bills is the Bill for an Act to Repeal the Exclusive Economic Zone Act 2004; and Territorial Waters Act 2004 to Enact the Nigerian Maritime Zone Act to Provide for Maritime Zones in Nigeria.

The third-term lawmaker chairs the Senate Committee on the Navy and is a member of the Peoples Democratic Party (PDP).

A representative of River South-East Senatorial District at the Red Chamber, Barinada has so far, sponsored six bills. One of these bills is seeking the establishment of a Federal University of Environmental Technology in Saakpenwa Ogoni, Rivers State.

He served two terms in the House of Representatives before moving in 2019 to the Senate, where he is Vice Chairman of the Senate Committee on Establishment and Public Service. 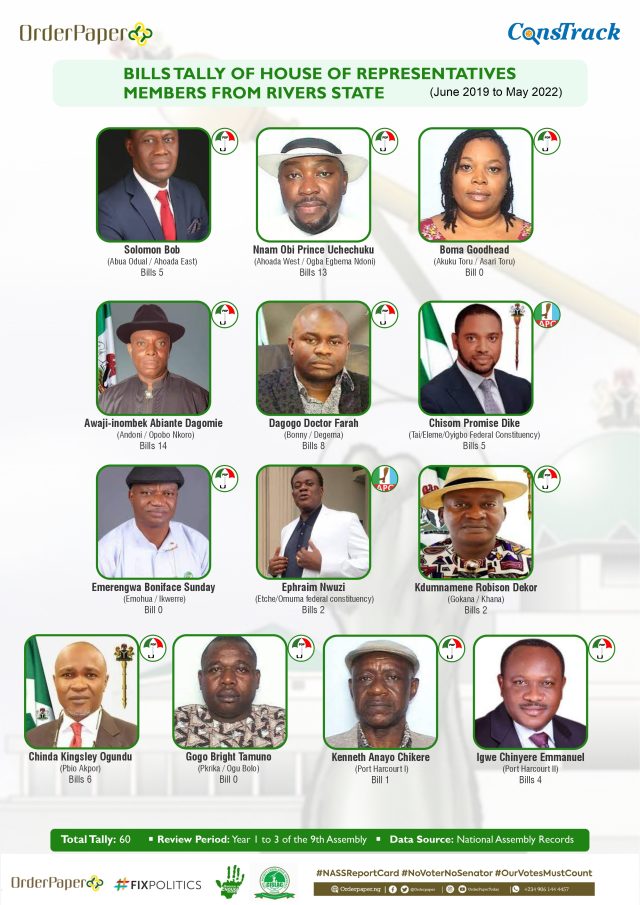 One of these bills is seeking the establishment of a Federal University in Omoku, Rivers State.

Doctor Farah Dagogo
Representing Bonny/Degema Federal Constituency in the House of Representatives, Rep. Dagogo previously served as a lawmaker in the Rivers State House of Assembly.

He has had eight (8) bills to his credit in the last three years. One of the prominent bills so sponsored is the Federal Medical Centre, Bonny, Rivers State (Establishment) Bill which the House has passed.

Kingsley Ogundu Chinda
Chinda is the member representing Obio Akpor Federal Constituency and he has had six (6) bills to his credit in the last three years.

An influential opposition voice in the Green Chamber, he leads the Peoples’ Democratic Party (PDP) Caucus in the House of Representatives.

Solomon Bob
A representative of Obua/ Oduah/Ahoada East Federal Constituency, he has sponsored five bills since 2019.

Chisom Promise Dike
The lawmaker representing Tai/Eleme/Oyigbo Federal Constituency has five bills to his credit in the period under review.

Chinyere Emmanuel Igwe
First elected in 2007 on the platform of the PDP, the Representative of Port Harcourt II Federal Constituency has so far sponsored four bills, including a Constitution of the Federal Republic of Nigeria 1999 (Alteration) Bill.

Ephraim Nwuzi
A member of the All Progressives Congress (APC) representing Etche Omuma Federal Constituency, he has sponsored two bills since he was elected to serve in the House in 2019.

Kenneth Anayo Chikere
Chikere is the lawmaker representing Port Harcourt I Federal Constituency and has sponsored one bill in the last three years as a member of the federal parliament.

Three of the thirteen lawmakers from Rivers State in the House of Representatives have zero bills to their credit in three years. They are: