On Throwback Thursday this week, we take a trip down memory lane to the controversy surrounding Presidential social media aide, Lauretta Onochie's previous nomination and rejection at the Senate

On Throwback Thursday this week, we take a trip down memory lane to the controversy surrounding Presidential social media aide, Lauretta Onochie’s previous nomination and rejection at the Senate.

Turned down from securing a top seat at the election management body, the controversial politician is set to stage a return to the Red Chamber for ‘confirmation’ as NDDC Board Chair sixteen months after. Will she be stopped from claiming her ‘compensation package’ by President Muhammadu Buhari again, or will she have the last laugh? 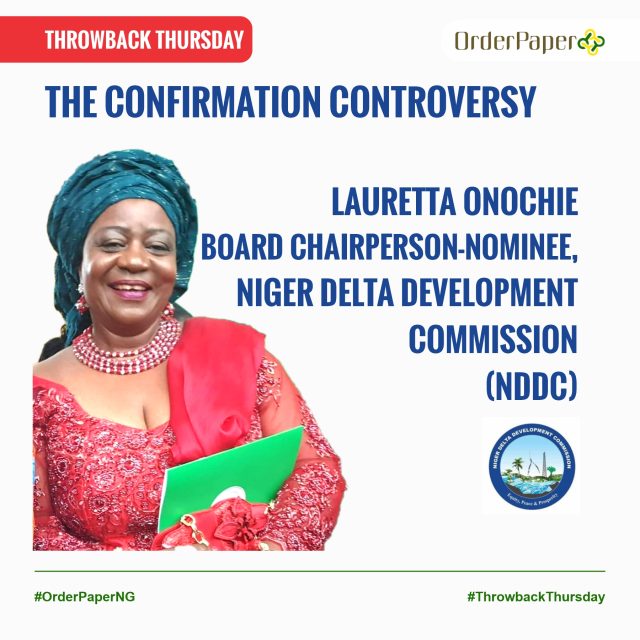 President Muhammadu Buhari, on Wednesday, forwarded about sixteen names to the Senate as nominees for the board of the Niger Delta Development Commission (NDDC). Among the names sent for the Senate’s confirmation is Lauretta Onochie, a Presidential media aide (Social Media) who is Buhari’s nominee for Board Chairperson of the Commission.

Onochie, a sexagenarian and educationist, has been a social media aide to President Buhari since January 2016 and is known to be very controversial and outspoken on social media. In sixteen months, her nomination to the NDDC Board is the second time the President will nominate her for a higher role in government.

In July 2021, the President had nominated her as a National Commissioner (representing the South-South) of the Independent National Electoral Commission (INEC) alongside three others.

She would, however, be dropped following public outrage over her nomination by eminent lawyers, over 70 Civil Society Organisations (CSOs), the opposition parties and other Nigerians.

A wide range of Nigerians wrote petitions, staged protests and called on the Senate to reject it. Many described the appointment as unconstitutional. The protests were majorly on her partisan strength – to the point that she had recently openly campaigned for the ruling All Progressives Congress (APC).

Evidence of her allegiance to the All Progressives Congress (APC), especially on social media, was brought forward, including a June 24 2020, tweet which showed that she lied through an affidavit came up.

There was evidence to suggest that her name appears as number 2 on the register of the APC in Ward 4, Aniocha Local Government Area of Delta State, further demonstrating her lack of integrity to be trusted with such a sensitive position.

In her defence, she had earlier told the Senate Committee on INEC during the screening that she discontinued her membership of the APC shortly after Buhari’s re-election in 2019  – a claim which turned out to be false. She is also said to have claimed to be “Madam Due Process,’’ and her adherence to law and due process was the reason behind the attacks, petitions and rejections against her.

On July 13 2021, after months of vehement opposition (including a court suit) to her nomination, the Senate eventually rejected her unanimously. The Committee told the Senate that she had to be disqualified based on federal character principles, adding that there is currently a serving commissioner from Delta State, where she hails from.

The Senators were (and remain) lauded for bowing to outrage in rejecting her nomination – despite their disagreement that it wasn’t due to the pressure from Nigerians.

According to a September 2019 article by the ICIR,  1,058 images uploaded by Ms Onochie (as an aide to the President) between August 1, 2018, and July  31, 2019, were studied. Its verdict was that she had used inaccurate pictures to buttress her claims or sentiments in at least 12 cases – thus making her tweets misleading.

Having been rejected as a nominee for the highly sensitive election management body, should her nomination for appointment  into a development commission for the Niger Delta be marked as a masterstroke?

For an agency of government (and region) in dire need of innovative solutions to its myriad of problems, is the President perhaps offering the region a better deal after nearly three years of waiting to do the right thing?

Could Ms Onochie be the most qualified person from the country’s oil-producing states who can breathe fresh air into the NDDC?

Indeed, there are so many questions to ask. Let’s hope Ms Onochie laughs last.

Throwback Thursday is OrderPaper’s special programme focused on historical trends in the polity. It spotlights the genesis of the same and previous interventions by the National Assembly in that regard; while exploring the present as well as the way forward