As many may have observed in the last two legislative assemblies, it almost becomes a norm for the issue of retirement for the Clerk of the National Assembly (CNA) to generate controversy, this week's Throwback Thursday special highlights the genesis of the saga with essential questions for the stakeholders

As many may have observed in the last two legislative assemblies, it almost becomes a norm for the issue of retirement for the Clerk to the National Assembly (CNA) to generate controversy, this week’s Throwback Thursday special highlights the genesis of the saga with essential questions for the stakeholders 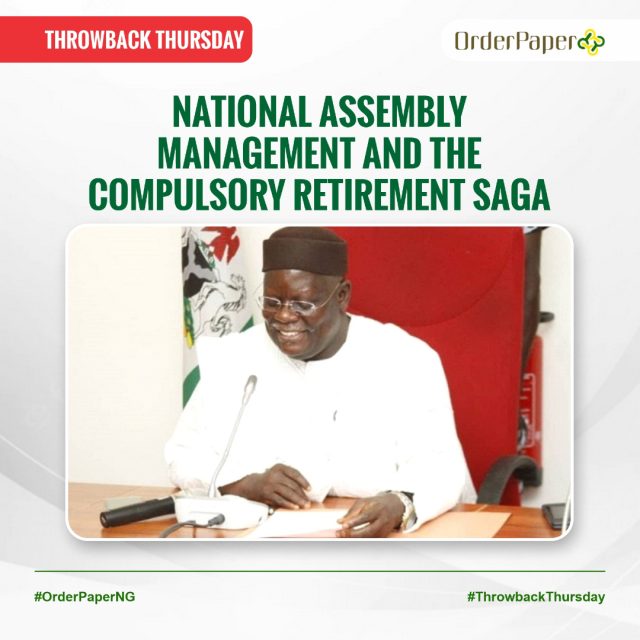 According to Section 19 (1) of the Act, it is also permitted to create regulations pertaining to its terms of service.

19.- (1) “Subject to the provisions of this Act, the Commission may make staff regulations relating generally to the conditions of service, including the power to fix salaries and allowances, of the staff of the National Assembly….”

Hence, it appears from the aforementioned section that the Commission, rather than the National Assembly, has the authority to alter employment terms (such as retirement age or years of service) unless otherwise specified in its staff regulations.

As a result, while the Act clearly lists the National Assembly’s approval as a need for the method controlling the adoption of worker compensation, the Act says nothing about the procedure governing other conditions of employment, such as retirement age or years of service.

In 2020, a former Clerk to the National Assembly (CNA), Mohammed Sani-Omolori, refused to proceed with his retirement in line with the convention and argued that the 8th Assembly had approved a tenure extension.

Following the controversial amendments that raised the retirement age from 60 to 65 and the required number of years of service from 35 to 40, the CNA and no less than 160 other officers who were to have retired from their positions would continue to serve for about five more years.

On July 17 and 20, 2020, the commission appointed Architect Amos Ojo and other management staff members to their respective acting capacities.

Architect Ojo would later be appointed on a permanent basis on September 30, 2022, and was due to proceed on pre-retirement leave by November 14, 2022.

Ahead of his attaining 60 years of age. Ojo is reportedly blocking moves to proceed on the mandatory three-month retirement leave, portending an imminent crisis within the Management of the National Assembly.

What, then, can we conclude is the underlying issue?

Throwback Thursday is OrderPaper’s special programme focused on historical trends in the polity. It spotlights the genesis of the same and previous interventions by the National Assembly in that regard; while exploring the present as well as the way forward