Barely seven days to the deadline for Nigerians to swap their old naira notes with the redesigned N200, N500 and N1000, Reps sets up 14-member Adhoc Committee to meet with Commercial Bank Operators on Wednesday. Lawmakers seek President Buhari's intervention

Barely seven days to the deadline for Nigerians to swap their old naira notes with the redesigned N200, N500 and N1000, Reps set up 14-member Adhoc Committee to meet with Commercial Bank Operators on Wednesday 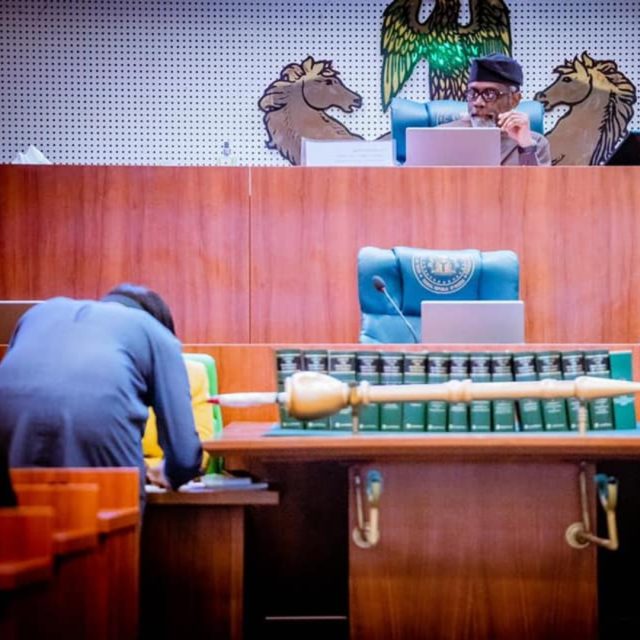 The House of Representatives has mandated the Central Bank of Nigeria (CBN) to review its policy on the redesign of some naira notes to allow for adequate sensitisation and summoned the apex bank governor to appear before the lawmakers.

This comes with a mandate by the House to its Majority Leader, Rep. Alhassan Ado-Doguwa, to lead a 14-member Adhoc Committee to meet with Commercial Bank Operators on Wednesday, 25th January 2023, to ascertain the true state of things with respect to the 31st January 2023 deadline given for the use of old naira notes.

These resolutions followed a Motion of Urgent National Importance titled, ‘Need for the Central Bank of Nigeria (CBN) to review the Cashless Policy and extend the timeframe of the currency swap’ brought by Rep. Sada Soli (APC, Katsina) during plenary on Tuesday.

The resolution is, however a departure from the earlier position of the lawmakers in December 2022, where they mandated the Central Bank to halt the policy due to the short notice given to citizens.

It also notes that banks are places where people keep their money for safety and expect to withdraw it when needed. Recall that in December 2022, the House of Representatives invited the CBN Governor to discuss the cashless policy and introduction of the redesigned 100, 200, 500 and 1,000 naira notes.

Aware that the cashless policy is in tandem with global best practices; Also aware that for such a policy to be successful, it should not be overbearing on the people and the economy;

Concerned that the financial institutions in Nigeria lack the infrastructure to handle a sudden increase in customer base as well as adequate employees to handle any challenges that could arise in the process of implementing the cashless policy within the limited time given by the CBN. Also concerned that Banks and POS Outlets are struggling with shortage of the redesigned new naira notes ahead of the CBN deadline of January 31, 2023, consequently making it difficult for them to comply with the CBN directives as regards availability of the new notes for customers.

Further concerned that despite several concerns and appeals by the National Assembly, the Governors Forum, the Bank Customers Association of Nigeria, and a host of other stakeholders in the country for the CBN to extend the period for the currency swap of the new Naira notes as well as review of the cashless policy, the CBN has remained adamant on the given deadline.”

Furthermore, the lawmakers expressed concern that due to inadequate sensitisation and the rush in the implementation of the policy, the country is exposed to a situation whereby businesses or rejecting the old currency even in the face of unavailability of the redesigned new naira notes.

“Also worried that as a result of the rigidity in the implementation of the policy, there is a tendency of decline in the economy if cash withdrawals are delayed due to short supply of the new Naira notes; Cognisant that in order for the policy to be successful and acceptable, the CBN should keep their relationship closer to reality, rather than theorised assumptions;

Also cognisant that in global best practices, currencies are phased out, not forced out, thus adequate time is required for such policy; further cognisant that the policy, though a good one, is not fair on the incoming government which will require a smooth transition, which will help to promote any financial system in the country.

Disturbed that coercing the people to accept the new CBN policy within such a timeframe will pose serious monetary challenges and impact negatively on microeconomic activities across the country.”

Supporting the motion, Rep. Ahmed Jaha (APC, Borno) commended the CBN for the policy but said his constituents would be greatly affected due to the time frame and the shortage of the new naira notes.

“I just came back from my constituency yesterday (Monday), and the CBN officials were there to do the naira swap, and I commend them for that. However, I realised that the currency is not enough; only one million naira was given to my people in Karawa Community when they had more than 100 million naira to swap. and it is not enough.

Another issue is that even the one million naira that was given was in 1000 naira notes and you know my people are just mere farmers and traders who can not do business without the smaller currency.”

The Speaker, Femi Gbajabiamila, who presided over plenary in his remarks, noted also that the CBN cashless policy is a welcome development, but the method by which they are going about it in terms of sensitisation was wrong.

“The CBN is making spirited efforts but they way have been going about the sensitisation of the people is not enough. Certain things were supposed to have been put in place before certain decisions are taken. The modules and the timing is a problem.

There is need to review the policy, it is not policy summersault by the federal government. The government should listen. The CBN is saying you have it (the new notes). We need to invite MDs (Managing Directors) of the various banks, we need to find out the truth,” he said.

The motion was unanimously adopted by the members when the Speaker put the question. In his ruling, he urged the Central Bank of Nigeria (CBN) to extend the implementation of the Cashless Policy to at least six (6) months.

It also directed the CBN to expedite action on making the redesigned N200, N500 and 1,000 notes available to Nigerians. and called on President Muhammadu Buhari to intervene in the insistence of the CBN on the tight deadline for the implementation of the cashless policy and currency swap.