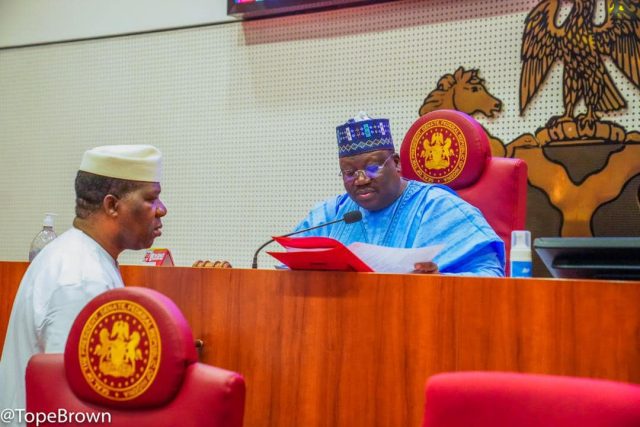 For the umpteenth time, the clamour for financial autonomy of local government councils in the country has suffered a setback in the ongoing Consitution Amendment process.

Passed as one of the forty-four Constitution Alteration Bills by the National Assembly in March 2022 and forwarded to the thirty-six State Houses of Assembly for concurrence, the bill failed to secure the approval of lawmakers in the State Legislatures.

The Senate has thus directed the Acting Clerk to the National Assembly, Sani Tambuwal, to, as a matter of urgency, transmit the 35 bills that have so far met the requirement of the provision of Section 9 (2) of the Constitution to President Muhammadu Buhari for assent in line with the provisions of the Acts Authentication Act.

The Senate resolution to this effect followed a motion moved on Tuesday during plenary by Senator Micheal Opeyemi Bamidele (APC, Ekiti Central) on behalf of Senator Ovie Omo-Agege who, as Deputy President of the Senate, chaired the Senate Committee on Constitution Review.

Having forwarded 44 Constitution Alteration Bills to the State legislatures for concurrence on March 28 2022, twenty-seven State Houses of Assembly forwarded their resolutions on 35 constitutional amendment bills to the National Assembly. The remaining nine State Houses of Assembly yet to forward their resolutions to the National Assembly are: Gombe, Jigawa, Kebbi, Kwara, Oyo, Plateau, Sokoto, Taraba, and Zamfara.

The Senate, accordingly, urged the Assemblies that are yet to forward their resolution on the bills to do so in fulfilment of their constitutionally imposed legislative obligation to the Constitution amendment process.

The National Assembly had, through its Joint Ad-hoc Committee on Constitution Review in October 2022, accused the state governors of preventing the various State Houses of Assembly from concurring with Constitution Amendments proposals for financial and administrative autonomies for the 774 Local Government Councils. The federal lawmakers, therefore, threatened to mobilise organised Labour, particularly Local Government Employees, against the various state governments on the subject.

Three months after, the Senate has now resolved to make a U-turn, with its resolution to transmit them for assent by President Muhammadu Buhari.

READ ALSO: Constitution Amendment: NASS ‘sets up’ C’ttee to resolve impasse
The 35 items read by Senator Bamidele as listed on the Order Paper are: