With thirteen female lawmakers in the Green Chamber, OrderPaper Nigeria highlights the Bills Tally of female members of the House of Representatives over the last three years (2019 -2022)

With thirteen female lawmakers in the Green Chamber, OrderPaper Nigeria highlights the Bills Tally of female members of the House of Representatives over the last three years (2019 -2022) 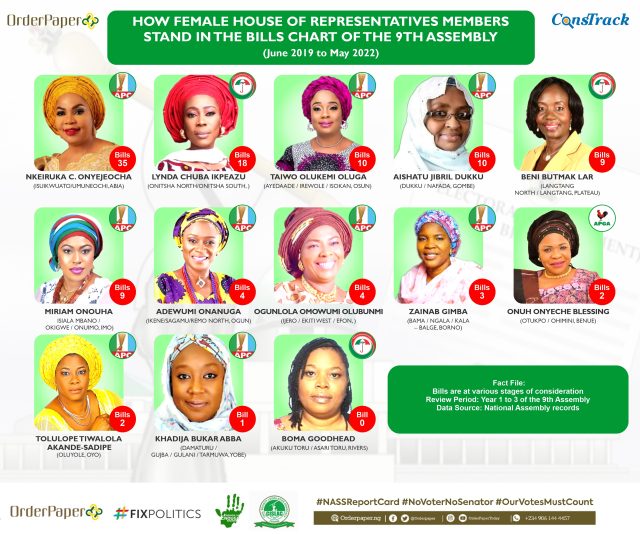 Nkeiruka C. Onyejeocha
The only female Principal Officer in the National Assembly, she represents Isuikwuato/Umuneochi Federal Constituency of Abia State.

She was first elected to the Green Chamber in 2007 under the platform of the Peoples’ Democratic Party (PDP), but later joined the All Progressives Congress (APC), where she rose to the position of Deputy Chief Whip in the House of Representatives.

Lynda Chuba Ikpeazu
A representative of Onitsha North/Onitsha South Federal Constituency in the National Assembly, she has eighteen bills to her credit in the last three years.

Among the bills she sponsored are Merchant Shipping Act (Repeal and Re-enactment) Bill, 2021; National Social Security and Welfare Board Bill, 2021, and a 1999 Constitution Alteration Bill.

She is a member of the Peoples Democratic Party (PDP) and currently chairs the House Committee on Maritime Safety, Education and Administration.

The lawmaker representing Ayedaade/Irewole/Isokan Federal Constituency of Osun State has ten bills in her name. She chairs the House Committee on Women in Parliament.

Similarly, Rep Aishatu Jibrin Dukku representing Dukku/Nafada Federal Constituency of Gombe State, has ten bills in her name. Dukku is also the Chairperson of the House Committee on the Independent Electoral Commission (INEC). They are both members of the All Progressives Congress (APC).

The Chairperson of the House Committee on Science and Technology sponsored the National Child Protection and Enforcement Agency Bill, 2019 and Older Persons (Rights and Privileges) Bill, 2019, among other bills in the last three years.

She doubles as Chair of the House Committee on Disabilities.

Adewumi Onanuga
The lawmaker representing Ikene Sagamu/Remo North Federal Constituency of Ogun State has had four pieces of legislation to her name since 2019.

Zainab Gimba
A representative of Bama/Ngala/Kala-Balge Federal Constituency of Borno State, she has, so far, sponsored three bills in the period under review.

Khadijah Bukar Abba
A representative of Damaturu/Gujba/Gulani/Tarmuwa Federal Constituency of Yobe State, she sponsored one bill in the period under review, which is the North East Development Commission Act (Amendment) Bill, 2020..

She is a former Minister of State for Foreign Affairs and currently chairs the House Committee on North East Development Commission.

Rep. Goodhead representing Akuku Toru/Asari Toru Federal Constituency in Rivers State, has sponsored zero bills in the last three years. She is a member of the Peoples’ Democratic Party (PDP).