Residents, as well as the indigenous people of Nigeria's Federal Capital Territory are represented by three lawmakers in the Senate and House of Representatives. This scorecard highlights the bills tally of the lone Senator and two Rep members

Residents, as well as the indigenous people of Nigeria’s Federal Capital Territory, are represented by three lawmakers in the Senate and House of Representatives. This scorecard highlights the bills tally of the lone Senator and two Rep members 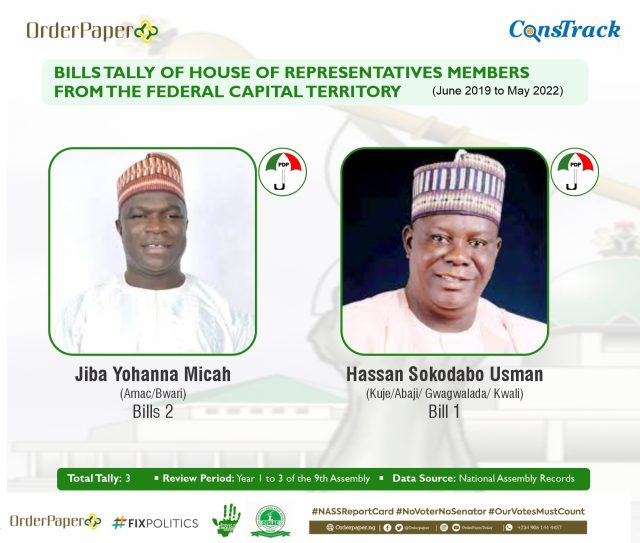 Hassan Usman Sokodabo
Representing Kuje/Abaji/Gwagwalada/Kwali Federal Constituency, the lawmaker sponsored a piece of legislation since his election to the House of Representatives in 2019.

A staunch member of the People’s Democratic Party (PDP) in the FCT, he, alongside another federal lawmaker when he sponsored a Bill on State control of Value Added Tax (VAT). A move that earned him applause from some civil society organisations. He, however, made national headlines when he gave out five of his children in marriage on the same date.

Rep. Sokodabo as a grassroots politician, has previously been Abaji Area Council Chairman and Commissioner representing the F.C.T in the Federal Character Commission (FCC).

Micah Yohanna Jiba
The member representing Abuja Municipal/Bwari Federal Constituency in the House Of Representatives sponsored two bills in the last three years (2019 -2022). The bills are

A seasoned politician and member of the People’s Democratic Party (PDP), he previously served as Executive Chairman of the Abuja Municipal Area Council (AMAC) of the Federal Capital Territory (FCT). 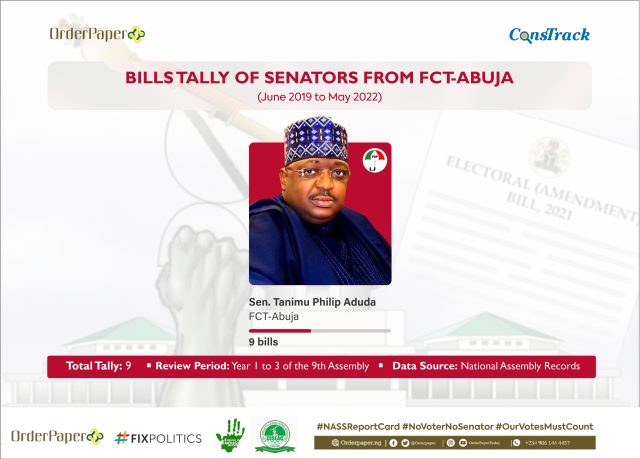 First elected to the Senate during the 2011 National Assembly Elections, Senator Philips Tanimu Aduda is the lone lawmaker representing the people of the Federal Capital Territory (FCT) in the Legislative Chamber.

Before his election to the Senate, he had served two terms in the House of Representatives as the member representing AMAC/Bwari Federal Constituency between 2003 and 2011. He also previously served in 1996 as the Councillor representing Karu Ward, Abuja.

PARTY/CAUCUS
Senator Aduda is a member of the opposition Peoples’ Democratic Party (PDP) and had served as the Senate Minority Whip since the beginning of the Ninth National Assembly before his recent elevation to the role of Senate Minority Leader in the Red Chamber.

MIDTERM RECORD
Having sponsored a total of four bills in the first year (2019 -2020) of the current Ninth National Assembly, he moved the tally to six bills by the mid-term (2019 -2021) of the Assembly and has somewhat shown consistency in the area of bill sponsorship, given his current records.

According to the National Assembly Records, the third-term Senator has nine bills to his credit in the period under review (June 2019 – May 2022).