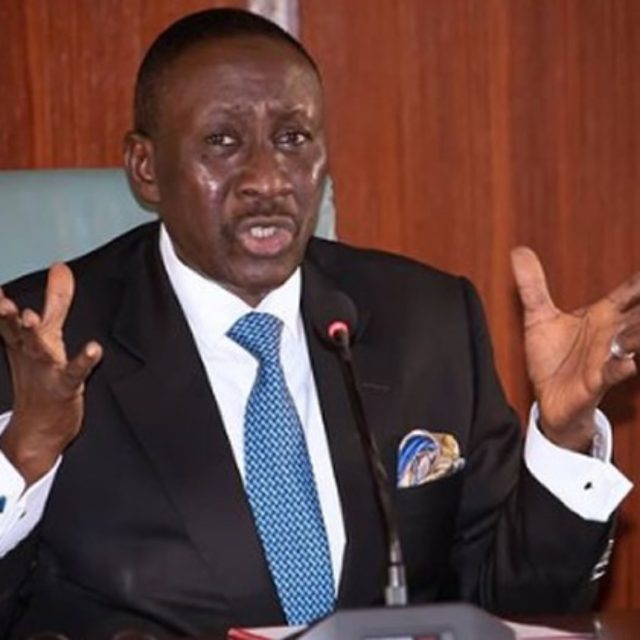 The House Committee on National Security and Intelligence has expressed concern over a downward review of the 2023 budget of the Intelligence Community, considering the insecurity challenges bedevilling the country.


On his part, the National Security Adviser said, “I must also say that the type of insecurity that confronts us is not peculiar just to Nigeria but is a global thing. And in today’s context, we can only overcome this problem when we recognise the importance of intelligence as being the driver, the propellant of all activities in the whole of society approach.

It is important that all the problems I present are taken into consideration by this very important committee. We hinge all our hopes and aspirations on whatever action you would take in solving the myriad of problems that confront us. And I want to assure you that the problems are quite enormous.

The successes we have been recording so far in overcoming the security challenges, especially in the last four to five months, are basically rooted in the efforts of the Department of State Services (DSS), National Intelligence Agency (NIA), Defence Intelligence Agency (DIA), having been able to provide timely intelligence to the operational element. I want to commend their efforts, and I also want to by extension, commend their counterparts’ efforts in the operational sphere.”

“Please, Honourable members, I want to put aside whatever other competing considerations there are. President Muhammadu Buhari has the desire to hand over to whoever is going to inherit what he is working on right now, a safer Nigeria. It is true, and I have to be very honest with you, that dealing with asymmetric warfare and overcoming asymmetric problems are completely different from what we experienced in the last century.

Everything revolves around intelligence. And the intelligence we are dealing with is a broad spectrum which goes all the way down to the local level. We deal with human beings. And if we are not supported in the right way, no matter how emotionally or psychologically prepared we are, we cannot overcome this problem without legislative support. I am also happy to inform you that in the recently conducted Ministerial Retreat, which the Office of the Secretary to the Government of the Federation (SGF) organised on behalf of the president, the Senate President and the Right Honourable Speaker of the House, who were there, and highlighted briefly some of the problems confronting us and they have all agreed to help us.

We are appealing to you in good conscience, all of you represent different parts of this country, and I know you have the interest of Nigeria at heart. Our people are suffering. They are weeping; they are wailing; they are moaning; they are gnashing their teeth. We must help them. We have our limitations as intelligence agencies. The rest can only be done through legislative drive,” he added.

According to the NSA, surmounting the security challenges the country is facing would not be realisable without legislative support. Babagana said intelligence was the driver of dealing with the country’s myriad of security problems.

Meanwhile, in his final remarks, the Chairman of the Committee urged the NSA to provide the Committee with a detailed analytical report covering the previous budget implementation.

“Despite the fact that this committee had appealed to the Ministry of Finance, Budget and National Planning to consider the removal of the agencies under the Intelligence community from the envelope budgeting system to strengthen their operational capacity, which could only be guaranteed through adequate funding, this committee would require the agencies to make a presentation of the 2023 estimates for further legislative action.

This methodology will also require an analytical presentation of the status of implementation of the previous budget to justify the sustenance of the coming allocation, which, in reality, does not call for any significant modification. In this regard, it is deserving of appreciating the Federal Government, through its numerous security and intelligence agencies, in response to serious national security challenges such as kidnappings, banditry, terrorism, secession and border crimes. We are calling on you to put more effort into ensuring a secured Nigeria, especially before, during and after forthcoming elections.

The role of the government in ensuring the corporate unity of Nigeria and sustainable internal security, especially in recent times, cannot be overemphasised. And in the same vein, I have considered it most expedient to appreciate, in a large magnitude, the cooperation enjoyed by the committee from the National Security Adviser, Major General Babagana Monguno (rtd.), who is also the Coordinator of the Intelligence community; the DG NIA, Alhaji Ahmed Rufai; DG DSS, Alhaji Magaji Bichi; AVM Abdullahi, Commandant, Presidential Air Fleet; Mr Adeleke, Commandant, Institute for Security Studies, and other heads of security agencies in the last three and half years.

I, therefore, wish everybody well as we look forward to leaving the people’s House soon. My career dream of working in the Executive and Legislature has been fulfilled as PA to the President and a member of the Green Chamber from 2015 till date. As I prepare to move on from the national parliament to a state executive as Kano State Gubernatorial Candidate of the ADP in 2023, I solicit your support to extend the network to ensure our electoral success in the general elections.”