Across the length and breadth of Nigeria, here are the biggest stories around Nigeria’s legislators and the institution of parliament you mustn’t miss this Friday

Ojochenemi Onje-James1 week ago4 min
Across the length and breadth of Nigeria, here are the biggest stories around Nigeria’s legislators and the institution of parliament you mustn’t miss this Friday: 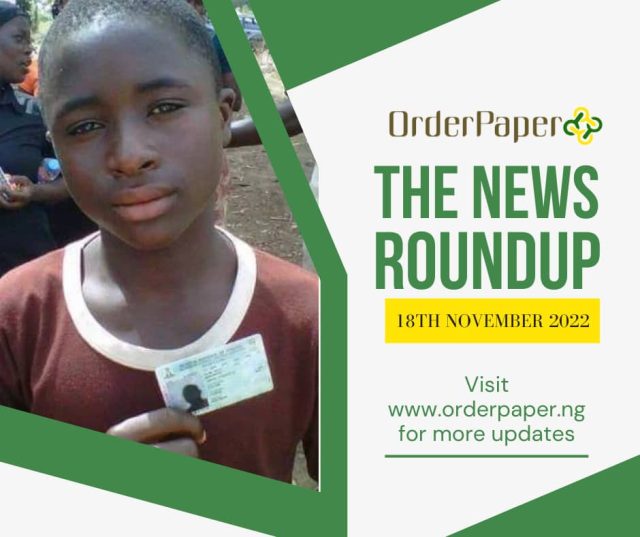 As contained in a statement released on Thursday by Festus Okoye,  National Commissioner, Information and Voter Education, INEC had earlier announced that it would display the physical copies of the register for claims and objections at the Registration Area level from 12th to 18th November 2022 and later at the Local Government level from 19th to 25th November 2022.

“In addition, the Commission cannot rule out infractions by its registration officials in allowing these ineligible persons into the register in the first place. Therefore, each confirmed case of infraction will be thoroughly investigated and culpable officials will be disciplined,” part of the statement by INEC read.

Reps knock NEMA over claim of reaching out to 1.4m flood victims

The House Committee on Ecology has expressed displeasure with the National Emergency Management Agency’s (NEMA) claim that it has spent N112.13 billion from Consolidated Accruals and Ecological Fund Utilisation on disaster management in the country from 2011 to 2022.

NEMA’s Director-General, Ahmed Mustapha, who appeared before the committee during an investigative hearing, said that the agency reached out to over 1,427,370 persons displaced by the flood disaster across the country, adding that balances from the funds are rolled over to the next fiscal year, unlike other appropriated finance.

“Details of the request based on the committee’s template. Number one, 2010 documents could not be sighted as they were vandalized during the ENDSARS protests. A police extract to that effect has been obtained and is hereby attached,” he said.

Chairman of the House Committee on National Security and Intelligence, Sha’ban Sharada, has pointed at current economic realities as the reason for a reduction in the allocation to the intelligence agencies from N221.7 billion in 2022 to N195.18 billion in 2023.

Sharada, who stated this when the National Security Adviser (NSA), Babagana Monguno, appeared before the committee on Thursday to defend allocations to the office of the NSA and other intelligence agencies, also appealed to the Budget Office to remove intelligence agencies from the envelope budget system.

“This methodology will require an analytical presentation of the status of implementation of the previous budget to justify the sustenance of the current allocation which in reality does not require any significant modification,” he said.

The Delta State House of Assembly passed the Administration of Criminal Justice Bill, during its plenary on Thursday.

This followed the parliament’s consideration of a report presented by Charles Oniyere, Chairman of its Joint Committee on Rules, Business, Legal and Judicial Matters and Special bills, at the session presided over by the Deputy Speaker, Christopher Ochor, in Asaba.

Presenting the committee’s report, Oniyere said the executive bill when passed would help to eradicate stress to victims and witnesses.

Zamfara Governor, Bello Matawalle has presented the 2023 Appropriation Bill tagged ‘Budget of Peace and Development’ to the State House of Assembly.

The budget, estimated at 188,872,272 billion naira, has the capital expenditure component put at N86,308,020; recurrent expenditure was put at N102,564,207, with security, Education, Agriculture, Health and Humanitarian Services taking the highest allocation.

While presenting the Budget on Thursday, the governor, who said the economic prospects going into the 2023 fiscal year are brighter, assured that the budget will help bring lasting peace and rapid development to the state.