Across the length and breadth of Nigeria, here are the biggest stories around Nigeria’s legislators and the institution of parliament you mustn’t miss this Thursday

Ojochenemi Onje-James2 weeks ago3 min
Across the length and breadth of Nigeria, here are the biggest stories around Nigeria’s legislators and the institution of parliament you mustn’t miss this Thursday: 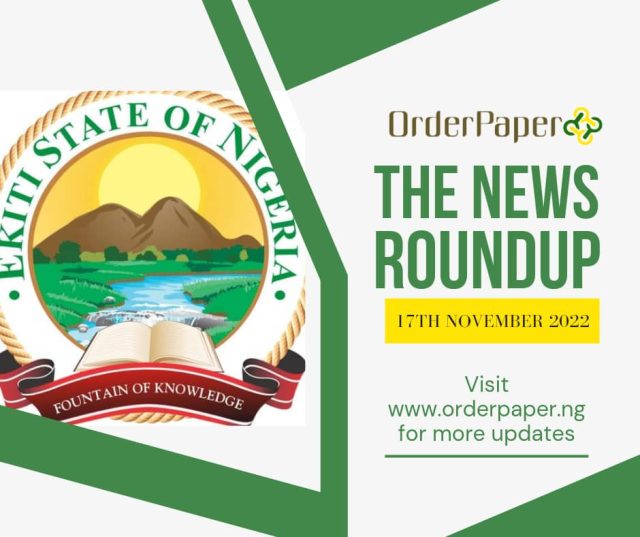 Barely twenty-four hours after members elected a new Speaker, the Ekiti State House of Assembly was shut over an alleged threat to peace at the state legislature on Wednesday.

As reported by Channels TV, the State Police Public Relations Officer, Sunday Abutu, on Wednesday confirmed that the action is connected to an intelligence report of a possible attack on the hallowed chamber by criminal elements.

Officers of the Nigeria Security and Civil Defence Corps and the Ekiti State Police Command were seen at strategic locations around the Assembly complex, just as its Staff members were sighted trooping out of their offices to their respective homes.

Edo Governor, Godwin Obaseki, on Wednesday, presented a N320.35 billion budget to the Edo State House of Assembly for the 2023 fiscal year at the Anthony Enahoro Assembly Complex in Benin City.

Presenting the budget estimates, which is a 44.3 per cent increase from the N222 billion budgeted for the year 2022, Obaseki said the budget was made up of N192 billion for capital projects, N127.5 billion for recurrent expenditure and total projected revenue of N300 billion.

The governor noted that the revenue consists of N144.26 billion statutory allocation, N41.2 billion as Value Added Tax (VAT); Capital receipts of 46.1 billion; IGR – N60.4 billion and N4 billion from grants, among others, while the balance will be sourced from development financing and financial institutions.

The House of Representatives Committee on Ecological Funds has berated several Ministries, Departments and Agencies (MDAs) of the Federal Government, as well as the Association of Local Governments of Nigeria (ALGON), following their failure to attend Wednesday’s investigative hearing on the utilisation of ecological funds.

Describing it as counter-productive, Chairman of the Committee, Rep. Ayokunle Ibrahim Isiaka, who spoke at the opening ceremony of the investigative hearing, explained that the stakeholders were deliberately invited to defend the amount they received and how it was spent yet stayed away.

The lawmaker specifically frowned at the absence of the Ministries of Health and Niger Delta Affairs despite being major beneficiaries of the funds in question.

The Senate Committee on Appropriation has given a deadline of Friday to chairmen of various standing committees yet to submit the report of the 2023 Budgets of the Ministries, Departments and Agencies covered by their oversight activities to do so.

Chairman of the Senate Committee on Appropriation, Senator Barau Jibrin (APC, Kano North), who stated this at the resumption of the Senate’s plenary on Wednesday, noted that erring Committee Chairmen risk being sanctioned.

The Senate on Wednesday canvassed for an allocation of N500 billion from the Service Wide Votes (SWV) to the Federal Roads Maintenance Agency (FERMA) for the urgent rehabilitation of flood-affected roads across the country.

The resolution followed the adoption of a motion sponsored by Senator Bassey Gershom (PDP, Cross River South), who noted that the 2022 floods had worsened the deplorable state of Nigeria’s federal roads, as the rise in water level is more than the 2012 and 2020 episodes.

Senator Gershom had argued that the justification for the proposed money became necessary since heavy vehicular and human movement of Nigerians associated with the end-of-year festivities would be impacted negatively due to the deplorable roads occasioned by the 2022 flood.