Across the length and breadth of Nigeria, here are the biggest stories around Nigeria’s legislators and the institution of parliament you mustn’t miss this Friday: 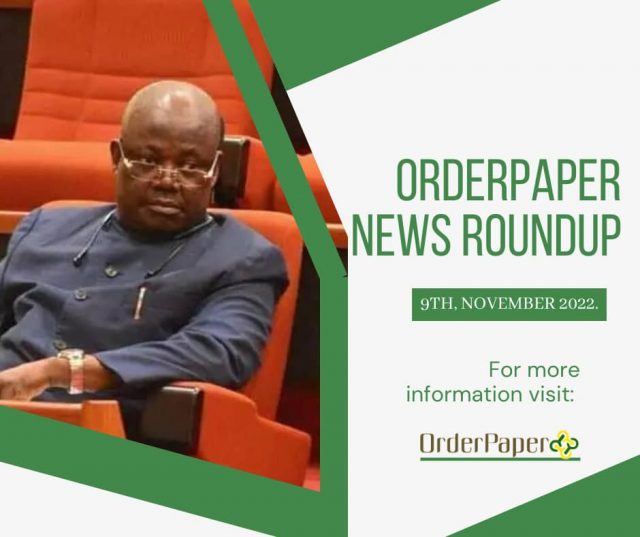 A Federal High Court in Taraba has reportedly sacked a federal lawmaker, Senator Emmanuel Bwacha following his defection from the Peoples’ Democratic Party (PDP) to the All Progressives Congress (APC).

In his ruling on Thursday, Justice Simon Amobeda ordered Bwacha to immediately vacate his seat on the strength of a case pursued by the State chapter of the PDP; having approached the court to declare the lawmaker’s seat vacant for dumping the party on whose platform he was elected.

The Nigerian Senate has assured Nigerians that the current insecurity in the country and the head count being planned by the National Population Commission (NPC) will not affect the conduct of the 2023 general election.

Chairman of the Senate Committee on INEC, Senator Kabiru Gaya, stated this on Wednesday, after defending his Committee’s budget report before the Committee on Appropriations; adding that elections would be held in 95 percent of the country,

Earlier, the Chairman of the Committee on Appropriations, Senator Barau Jibrin, commended Gaya’s committee for doing a meticulous job.

Senator representing Bauchi North in the Senate, Adamu Bulkachuwa, has defected from the All Progressives Congress (APC) to the Peoples’ Democratic Party (PDP).

Spokesperson of the PDP in Bauchi State, Yayanuwa Zainabari who confirmed Senator Bulkachuwa’s defection, said the lawmaker was received into the fold of the party this week and was issued a membership card.

Senator Bulkachuwa, who chairs the Senate Committee on Foreign Affairs, is the third and final Senator from Bauchi State elected to the Upper Chamber on the platform of APC in 2019 to dump the party for the opposition.

The House of Representatives Committee on Diaspora has asked the Nigerians In Diaspora Commission (NiDCOM) to protect undocumented Nigerians living outside the country.

Committee Chairperson, Tolulope Shadipe (APC, Oyo), stated this on Thursday while briefing journalists after a Budget Defence Session at the National Assembly.

She said though the undocumented Nigerians are outside the mandate of NIDCOM, the government cannot afford to ignore them because they are still citizens of the country.

Anambra Governor, Chukwuma Soludo, on Thursday, presented the 2023 Budget totalling N260 billion and entitled ‘Budget of Acceleration,’ to the State House of Assembly.

The development is coming about six months after the governor presented a revised 2022 budget tagged ‘Taking Off from the Blocks’ had a total figure of N169,621,744,131 to the same Assembly.

According to Soludo, the revised 2022 budget whose fiscal document was originally prepared and presented by his predecessor, Willie Obiano; became necessary so as to reflect the then realities, challenges, and priorities of the new administration and Ndi Anambra.